Being the secret Santa of someone is an exciting thing as you can keep up the suspense and send exciting gifts. But, at some point, you may have to reveal who you are with clues.

This is the usual way of playing the secret Santa game.

Excited? All set to play the game with a bash? Let’s dive in!

Before we dive right into the templates, we always wanted to let you know that there is a section dedicated at the end to address your common queries about secret Santa clues. 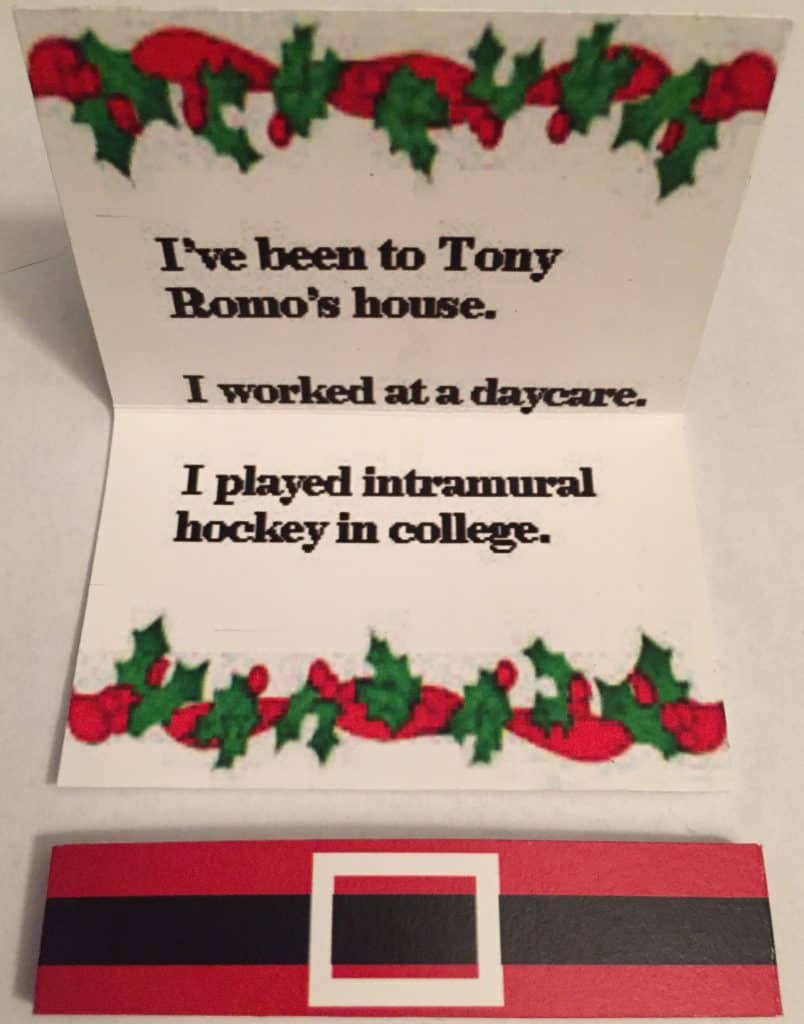 Here is a template that is Christmas Santa-themed with those hats and leaves. When you share a clue, you may have to make it as easy as possible.

There are three clues connecting to the same person.

If you assess it further, it tells about the work, recent visit, and a past event that the receiver can recollect. You can use the same format to draft clues about you.

However, remember that you can include more clues as well but don’t let that get extremely easy to break them down. 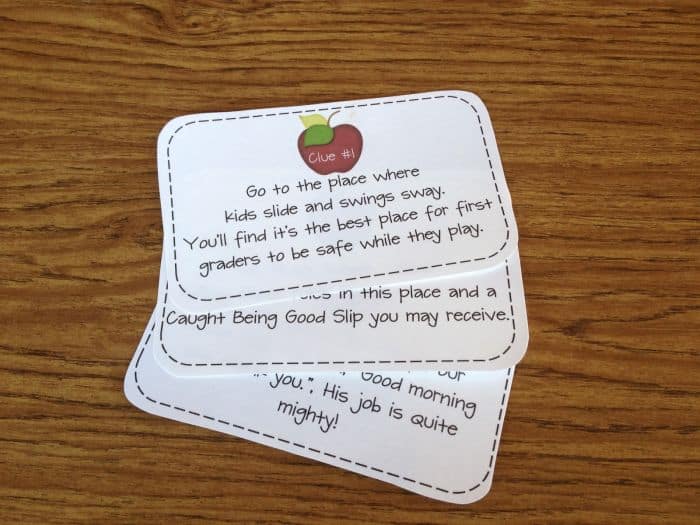 If you are in a plan to let the receiver find clues for some more time, you can apply the principle of treasure hunt. Here is a clue that gives the instruction to find the next clue. This makes it more interesting. You may have to create 3-5 clues but don’t let them get boring. There are a few ways to extend the suspense. 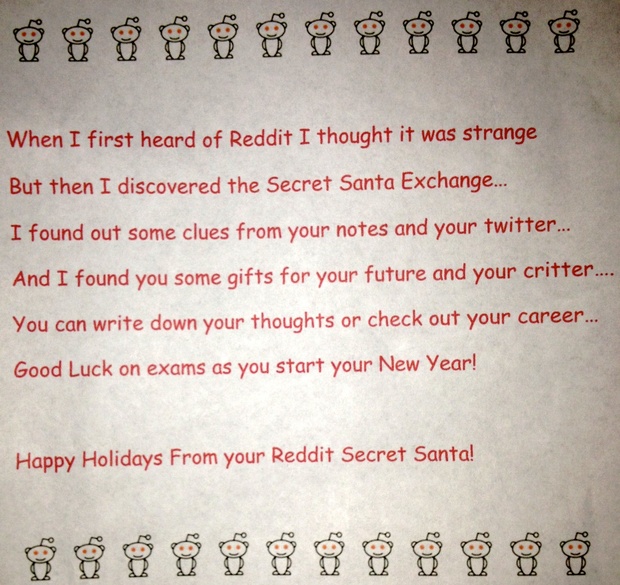 Wanted to create a nostalgic memory with the clue you share with the reader? This is the one to start with. It indicates how the secret Santa has first met the receiver.

Alternatively, you can also mention a specific event that you and the receiver were a part of. This will let the person instantly recollect a past event and enjoy nostalgic memories. 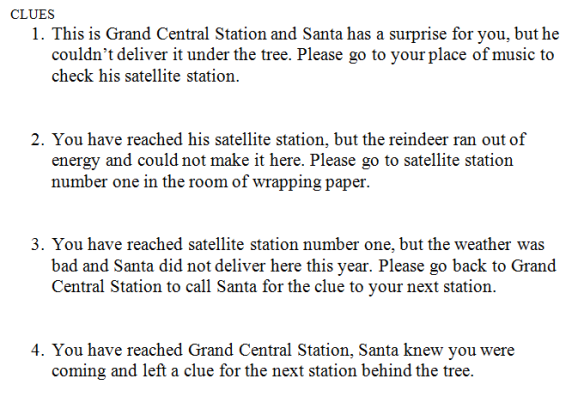 How about creating a range of clues and issuing them on the same day? If you are planning to conduct a secret Santa game physically on one day and prefer giving clues right before that or after that, you can prepare a range of clues like the one you see here.

Perhaps, make use of cards and neatly pack them in envelopes. This will add more professionalism to what you create and deliver to the receiver.

A secret Santa clue does not always have to be in paragraphs. You can explore other forms like riddles, poems, lyrics, and stories. This approach will give a fresh look to the clue.

If you are issuing clues along with other team members, it is always critical to be extra unique so the receiver feels special and gets festive vibes.

Here is a poetic clue that has rhyming words and gives an experiential story to let the receiver experience, enjoy, and also guess it.

Christmas is all about celebration and this clue lets that do poetically. This is ideal if you are issuing clues to adults. 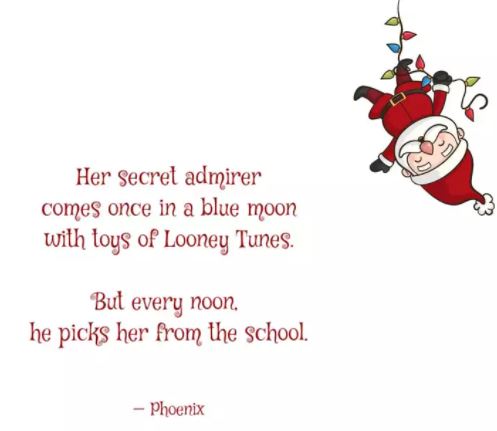 Santa clues need not always be long. You can make it short and interesting like the one in the template. This quick clue indicates an event that can be easily recollected.

A quick way to create this form of template is – connect a past event with you and a present or an unforgettable common event and let the receiver keep guessing who you are.

This gets interesting than ever. 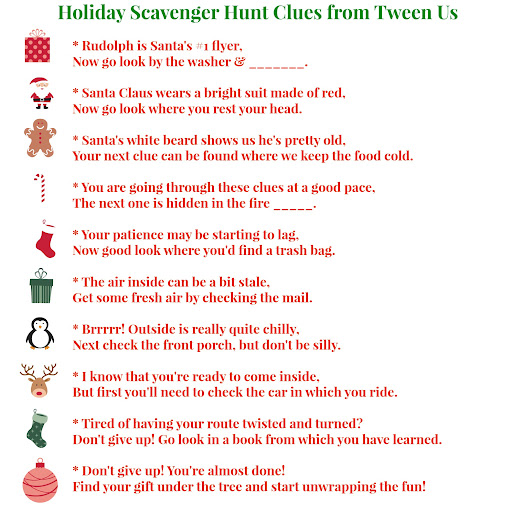 This is ideal if the hunt is thrown by the office or a group of family members.

The clues are interesting and directly indicate the gift that the receiver can anticipate. While this directly conveys the point, you can also add up more clues if you have time. 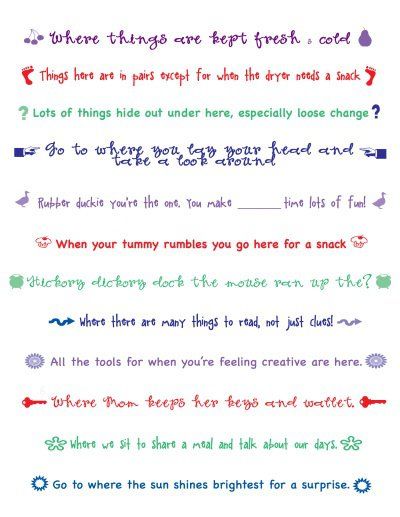 The purpose of playing a secret Santa game is to build a rapport and inform the receiver that there is something exciting that can be anticipated. If you are running short of clues like riddles, letters, and poems, you can simply limit to the direction to find the gift.

This is sufficient. However, ensure that the person is accessible and known to the receiver.

The biggest advantage of this sort of game is that it gets straight and does not have any beating around the bush to gift the receiver. 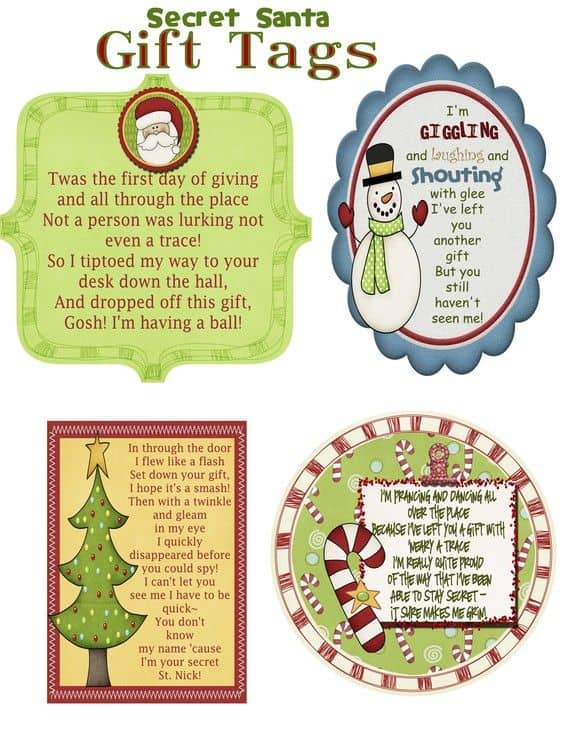 Tired of giving the same old clue to the receiver? How about giving it a new look with the secret Santa gift tag? Well, this template has a few examples that has riddles or events or stories printed in it.

This is used when the gift is handed over to the receiver without disclosing who the secret Santa is.

While this gets faster, the receiver still has the same enthusiasm until the eve of Christmas when the sender’s name is revealed. 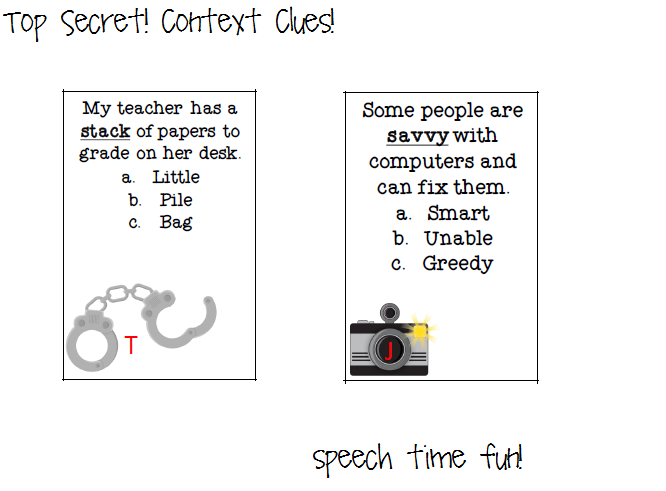 There are no hard and fast rules to the way clues are issued to the receiver. To give the secret Santa game a new look, you can also conduct a quiz where the receiver might have to answer the question. If it is right, he gets access to the gift.

Otherwise, the next clue is shared. While you do not have to disclose the secret Santa, you can distribute context clues to receivers and this might be an unexpected way to celebrate and enjoy the game. 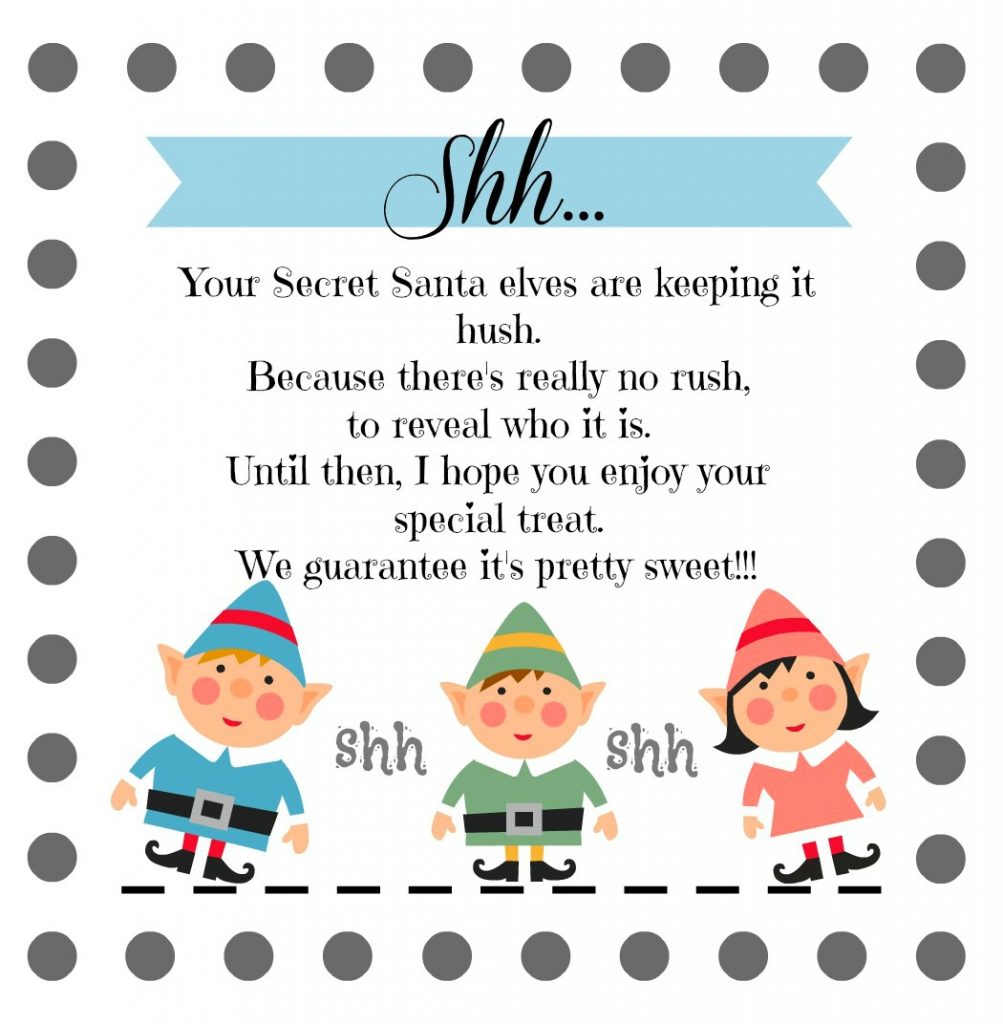 Preparing clues for kids are not the same as adults. It has to be peppy, innovative, and playful so that the kid enjoys it while reading it. Probably, you can also connect with something that was written on the elf on the shelf letter or just anything that the child likes.

When you prepare the printable for kids, it has to replicate something similar to the one in the aforementioned template. This is because it remains catchy and also cute.

Here is another template that you can quickly access and print. Since it is well formatted, you can either write the text in hand or just provide a picture or the direction to find the next clue. Isn’t that unique? 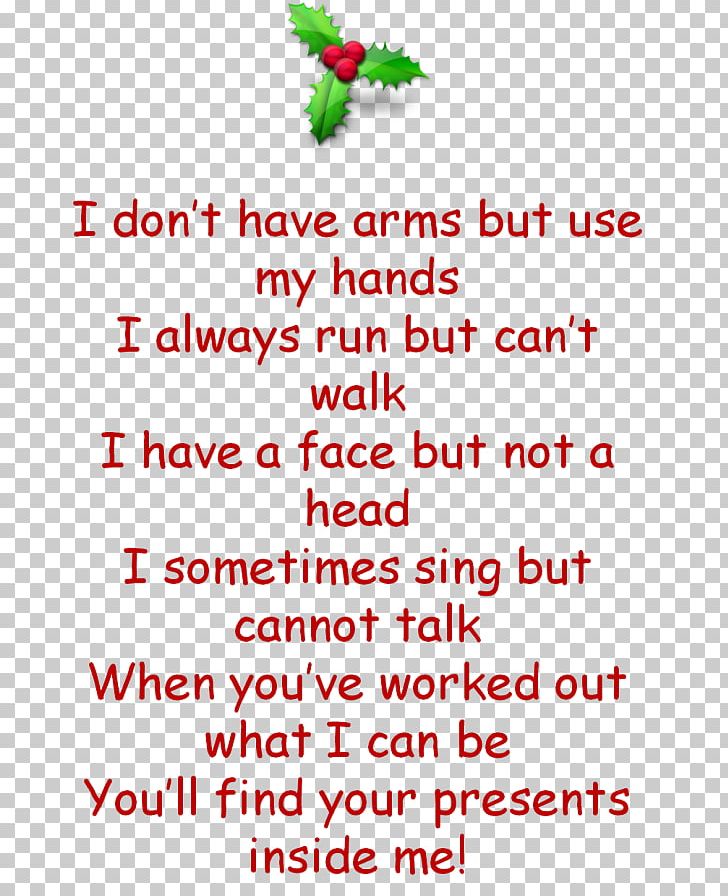 Thinking of stuffing the gift inside a refrigerator or a study table or the bag of the kid? You can use that as a way to define the clue and gain the attraction of the receiver.

A common mistake that you may commit here is giving too much definition about the product without including the festive mode. Just keep in mind to review the clue you have created and get things rolling.

1. How to create secret Santa clues?

There is no specific format. Feel free to give a hint or include a poem or a riddle to direct the person to the next clue or the gift directly. You can create secret Santa clues using one of the software applications – Microsoft Word, Paint, Photoshop, and templates you have seen above.

2. How to make a secret Santa clue interesting?

When you play the game of secret Santa, keep in mind not to get too personal and allow it to be fun-filled. Include clues that are relatable and include a twist in everything that you do.

Give a broad differentiation between clues for kids and adults. Happy playing!

The secret Santa gift exchange program is a widely followed tradition on the occasion of Christmas. How confident are you in gifting your loved one a gift of his/her choice? You are in a situation...

Continue Reading
link to 9+ Santa Letterhead Template - From The Desk Of Santa Claus!

What makes a letter trustworthy? It is the letterhead that adds more trust as it informs the source and destination thereby improving the overall authority. When it comes to the eve of Christmas,...